My boyfriend is a bully

When I speak to people who had not suffered domestic violence – fortunately there is still a few of them in the world – I notice how little they actually understand this phenomenon. The first thing they say is “why doesn’t she leave?” I feel so angry when they say that but then I realise that it is not their fault, they simply do not know. After all, until a few years ago I thought exactly the same. I had no clue that people could manipulate you and play with your mind, leaving you powerless and unable to react. In fact, I knew nothing about domestic violence. To me it was just about some idiot hitting his partner, who was too weak to leave him.

And yes, I knew my brother in law was a nasty piece of work, that he was aggressive, that he was not treating my sister right but I could not even remotely imagine what she was actually going through. Not until I met L and I had the misfortune to get a taste of it myself.

Before meeting him, I had not been very lucky in love. The guys I liked just did not seem to return my feelings and were either completely uninterested in me or were not interested enough to have a serious relationship. And then he came along. This sweet looking guy was clearly into me. He was kind and caring and I could not believe my luck. I wish someone had told me that guys like that can turn into abusers because I had no idea. I thought that bad guys were womanisers, aggressive and full of themselves. I had met my fair share of them in the past but they could never deeply hurt me because I knew what to expect of them. They were at least honest about who they were,  what they thought of me and women in general.

L, in my mind, was the opposite of that. He was discreet, modest, sensitive (so I thought) and he had been in long relationships in the past, which to me meant he was not looking to sleep around but wanted to find love. I even remember thinking that he somehow had a strong feminine side because he was not afraid to show his vulnerabilities. How foolish I was.

This is how it all begins in most cases of domestic violence. The man acts in such a way that you become convinced he is the answer to all your prayers. This stage is crucial in the perpetration of the abuse, because you have formed an opinion of him as a nice person, someone you can trust. It is really hard to let go of that opinion even when evidence to the contrary starts to emerge. The abuser is usually very skilled at recognising when you have taken down your defences and until he’s sure of that he won’t be anything but nice to you. Only when he has gained your full trust he can start revealing his true colours and let the abuse begin.

It starts slowly, with a negative remark, or with him getting upset for stupid things. It does not seem like a big deal at first. After all, nobody’s perfect and we all know that to be in a relationship you have to be patient and understanding. You’re not letting go of the guy of your dreams, the one who loves you so much and talks about a future with you, just because he had a go at you once or twice, are you? You may also think that it is partly your fault – firstly, because he is very good at making you believe so and secondly, because you have been told time and time again that blame never entirely falls on one person, that there are always two sides to a story. What they didn’t tell you, though, is that this is only true of healthy relationships. When you deal with an abuser his reaction is never triggered by something you do but by their desire to control you. They get angry because by doing so they will influence your behaviour and you’ll end up doing what they want. In my case, one of the first times L displayed an abusive behaviour was when he became enraged because I had my period and I did not feel like going out with him and his friends. I was more than happy for him to go while I stayed home and rest but apparently that did not make me a ‘good girlfriend’. I felt he was being unreasonable and tried to make him see sense but he was very skilled at twisting things round and playing with my innate sense of guilt. I ended up giving in and going out with him. He had already taken control.

Many more such episodes followed, along with insults, silent treatment, attempts to isolate me from my friends by hinting that I was dedicating too much time to them, etc. All this was alternated with moments of incredible sweetness, which sent me into a state of confusion. The unconscious message I was getting is that if I did what he wanted me to at all times he would revert back to the old him, the guy I fell in love with. I wanted that person back so badly that I began to submit without even realising it.

But of course something inside me told me that this was wrong, that I was slowly giving up my freedom and turning into someone I was not. One night I dreamt that I was losing an arm. Not through an accident, the limb simply slipped off me. It was clearly my unconscious telling me that what was happening to me wasn’t right. I tried many times to break off from him but I always went back, because I believe I had developed an ‘addiction’ to him. I later discovered this is called trauma bonding and it’s the normal reaction when someone exercises control over you. 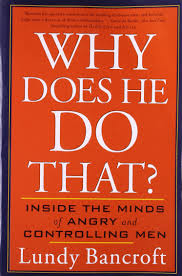 During one of my attempts to end the relationship I started focusing more on his violent side and I typed “my boyfriend is a bully” on Google. I was shocked by what came out. People  were describing patterns of behaviours that were practically identical to those of my ex and they had one label for them: “abuse”. Could it be true? Could I have been a victim of abuse? I wasn’t convinced at first for the obvious reason that I don’t believe everything I read in the internet but also because the whole idea was very difficult to take on. I had always thought of myself as an intelligent person who is good at judging others so the thought of having allowed someone to manipulate me to such an extent was just too hard to swallow. Still, once the idea was instilled in my head I could not let it go, I had to investigate further. I browsed through books dealing with the topic and eventually ordered one, called “Why Does He Do That? Inside the Minds of Angry and Controlling Men”, by Lundy Bancroft. As I was reading it was as if all the pieces of a puzzle were falling into pieces. Some of my boyfriend’s supposed inconsistencies began to make sense. His going from being super nice to incredibly cruel, his incapability to understand my point of view even though he appeared to be highly intelligent, the way he twisted things around so that everything was always my fault, were all part of an established pattern of behaviour aimed at destabilising me and prevent me from taking control. I now understood why I felt so confused, it was my natural response to his abuse.

I still had some doubts about the whole thing though, I needed one final confirmation. I knew a girl who had been dating him for a short time before I met him and one night she was at the same dinner party as I was. I took courage and went to speak to her, openly asking her what had been her experience of dating this guy. She reported the same violent and controlling behaviour and said that he had somehow left her traumatised.

At this point I was sure I was not imagining things, it was all real and I had to find a way out of this. Even though I had stopped seeing him after our last argument I still felt very much attached to him. I craved him like drug addicts crave their daily fix and I felt I needed help. I joined a forum for abused women and whenever I felt the need to write to him or reply to his texts I would write there instead. This is how I found the strength to sever all contacts.

After the cravings ended I was no longer at risk of going back with him but I was a destroyed woman. In the space of a relatively short time – I was with this man for just over a year – he had taken away my self-esteem, my joy, my enthusiasm for life.  I cannot even begin to imagine what it does to women who have been in an abusive relationship for decades, such as my sister. My journey to full recovery lasted for about two years.  The thing that really helped me was researching the issue of domestic violence in order to find out more and to better understand what had happened to me. This, in turn, made me develop an interest in gender inequality and women rights, leading to my current involvement with women charities and conducting campaigns to end violence against women.

I will never be the person I used to be before meeting L, that person does not exist anymore, but I like who I am now and where I have got to in life so far. I sometimes still get angry with myself for letting him treat me like that but I know it could have happened to anyone. I used to pride myself on being a strong and independent woman, and I still think I am, but I now have come to accept my vulnerabilities. I know that the longing to be loved does not make me weak or needy, just human. I also know that, had I been educated on the issue of domestic abuse, I would have been able to recognise the signs much earlier. This is why raising awareness is so important. So that girls and women do not fall victims of this type of behaviour and, if they do, they can realise what is happening to them.  You cannot escape abuse if you do not recognise it. And this is also why I’m writing this, so that those who have been through a similar experience know they are not alone and that it is possible to get out of it. It is a long and painful journey but with the right sort of help and information it can lead to a complete recovery.

If you or someone you know has been affected by abuse, you can speak to a friend or family member or access free confidential support 24 hours a day 7 days a week; National Domestic Violence Helpline 0808 2000 247