Last month we asked you to nominate the woman who inspires you the most. The person who received the most votes is former model and FGM activist Waris Dirie.

Born in Somalia, she underwent FGM at the age of three and escaped a forced marriage at the age of 13. She later became a model and an actress. 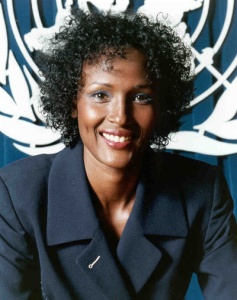 In 1997 she became a UN ambassador for the abolition of FGM.

The following year she wrote Desert Flower, an autobiography which became an international best-seller and some ten years later was turned into an award-winning feature film.

She has since abandoned her modelling career but has continued to write books and to campaign against FGM. In 2002 she founded the Desert Flower Foundation, an Austrian-based organization aimed at raising awareness on the dangers of FGM.

To read her full biography or to know more about the Desert Flower Foundation click on the links below.

Keep the nominations coming in and tell us on facebook or twitter which woman inspires you the most! Don’t forget to hashtag #empoweringwomen with a link to their public profile.